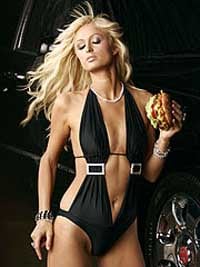 The 29-year-old American socialite is said to have breached her contract by failing to promote products made by HairTech International.

Instead she was photographed in magazines and papers wearing extensions from a rival firm, the company alleges.

Hair-ess: Paris with approved HairTech extensions, left, and with a ‘rival product’

HairTech claims her party lifestyle went against the company’s marketing campaign and that she cost it money by missing a launch party because she was in jail for a driving offence.

The Los Angeles-based company has accused Miss Hilton of fraud and deceit and is demanding she pay it £22million in damages – ten times what she was paid under the original contract.

The legal row is the latest in a series of court battles for Miss Hilton, the heiress to the Hilton Hotel empire, and is the fourth time she has been sued in recent years.

She signed a £2.2million deal with HairTech in 2007 which gave the company global endorsement and licensing rights to her name for hair extensions, hair care products, brushes and combs.

The products were marketed as Paris Hilton’s Dreamcatcher Hair Extensions and came in ten colours, including ‘Paris Blonde’.

She also launched a popular headband range called ‘The Bandit’ which had hair extensions attached to it.

Her role was to be the face and spokesman for Dreamcatcher, but according to papers lodged in the Los Angeles Superior-Court she did not uphold her part of the deal.

On at least one occasion in 2008 she was seen wearing the hair extensions of a rival company, the papers say.

Hair today: Hilton, pictured back in June, is a big fan of hair extensions

And she missed a key launch event for the products in 2007 after she was jailed for 23 days for driving twice while on probation for reckless driving.

Her failure to appear cost the company £ 4.2million in lost revenue and business opportunities, it claims.

HairTech also says she breached the contract because an ‘implied’ term in the deal was that she would ‘obey the law’.

If the case goes to trial, a jury or judge will decide whether Miss Hilton owes HairTech any money.