On set romance as Emma Stone falls for Spidey 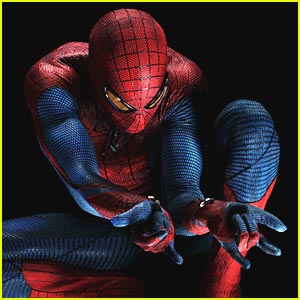 They are rumoured to have embarked on a real life romance after meeting on the set of the new Spider-Man film.

And the chemistry between Emma Stone and Andrew Garfield was clear to see as they shared a tender scene in the hotly anticipated movie.

Stone, 22, who plays Gwen Stacy in the film, is seen sponging down 27-year-old Garfield, who appears to be suffering from several cuts to his torso.

Garfield takes over as ordinary teenager Peter Parker for The Amazing Spider-Man, which will be released next year.

The actor, who was brought up in Epsom, Surrey, split from his girlfriend of three years Shannon Woodward back in May, while Stone is said to have broken up with boyfriend Kieran Culkin, fuelling rumours of a new romance.

This latest photograph shows the British actor with a distinctively toned torso and muscular arms, perhaps as a result of Garfield’s intense preparation for the role.

‘It’s very specific what we’re trying to achieve in terms of body type and the feeling of that,’ he has said.  ‘Rest assured, there’s a lot of people who are helping me with it because I have no discipline in that respect.

‘My father’s a swimming coach and I kind of rebelled against that very, very early on so any form of physical discipline has to be really 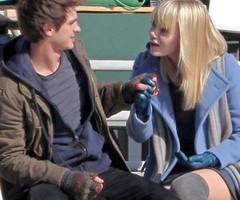 cracked with a really smart whip.’

The actor tells Entertainment Weekly in a new interview that he identifies with alter ego Peter Parker, who was last played by Tobey McGuire in the previous three blockbuster films, directed by Sam Raimin and co-starring Kirsten Dunst.

‘I always felt stronger inside than I looked on the outside which got me into trouble,’ he tells the magazine,’ about his teenage years.

‘I related to Peter Parker so much because I felt like someone else inside.  I loved the comic books and the animated TV series, and I even dressed up as Spider-Man as a kid.’

Garfield was only 18-years-old when he saw Tobey McGuire in the first Spider-Man movie.

‘The action sequences were so expansive and breathtaking with Tobey swinging through the air,’ he recalls to the magazine. ‘It just floored me!’

But the new film, which will hit cinemas next summer, will be a departure from the last films.

Directed by Marc Webb, it will be ‘more contemporary’, ‘more gritty’ and ‘more character driven.’

‘Tobey did an amazing job, says Garfield. ‘This isn’t a replacement. I want to be clear about that. It’s another chapter.’

Webb says that Garfield was the stand out actor in the Spider-Man audition process.

‘We auditioned hundreds of actors and then we screen tested four of five,’ he tells the magazine. ‘Andrew was probably the least-known person…but I kept going back and watching him, thinking, ‘What is this guy doing?’ 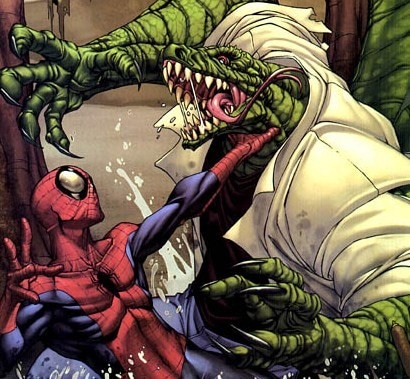 The movie will also feature British actor Rhys Ifans as Dr Curt Connors, who transforms into Spidey’s enemy the Lizard in an experiment gone wrong.