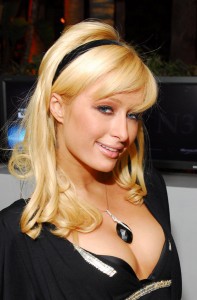 Paris Hilton had a terrifying start to the day when a man, she says was wielding two knives, tried to break into her home.

Los Angeles Police Department rushed to the scene and arrested a man in his 40s who they took to a local jail.

The heiress tweeted a picture of the police at her home with the man in handcuffs, along with the message: ‘So Scary, just got woken up to a guy trying to break into my house holding 2 big knifes. Cops are here arresting him.’

The incident occurred around 6.30 am this morning . Hilton told police that the man was banging on windows but never actually entered the home.

This isn’t the first time Hilton’s had a terrifying incident involving a knife.

Hilton was forced to up her security after a stalker pretending to be her fiancé turned up at her father’s office carrying a knife.

She says: ‘I’ve had a lot of stalker incidents, and I usually can handle them.

But the scariest one was when a guy turned up at my dad’s office and said he was my fiancé . He forced his way inside and the cops discovered he had a knife on him. That was freaky.

‘Now I have a lot of security all the time so I feel safe. I guess that’s one of the things you have to learn to live with, but it’s still scary.’

Sources close to Hilton told U.S. website TMZ that she saw the man on her security cameras and called police immediately.

Paris was told the man was considered ‘armed and dangerous’  and that she was ‘lucky’ he didn’t get inside.

According to TMZ Paris didn’t know the man and it’s unclear if the guy targeted her or if it was a random incident.